Mountain Transport Institute’s owners believe in making contributions to the local communities that it operates within, by way of supporting a number of local groups and initiatives. We are proud to be a part of our community. 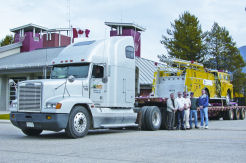 Castlegar Fire Truck – When the Castlegar Fire Department purchased a new fire truck, the Castlegar Rotary club chose to send the old one to help a community in Honduras that did not have one. The Rotary Club had the truck serviced and prepared for transport. MTI donated its services (tractor, flat deck, and driver) to move the truck from Castlegar to the docks in Vancouver, where it was shipped to its new location. 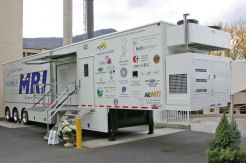 Mobile MRI – The mobile MRI was purchased by the Interior Health Authority in conjunction with local fundraising groups in the Southern Okanagan, as well as East and West Kootenays. The $2.6 million MRI unit is contained in a 53 foot trailer, which moves between Trail, Penticton and Cranbrook on a regular schedule. MTI donated its services (tractor and driver) to move the MRI between each of the three hospitals for the first year. 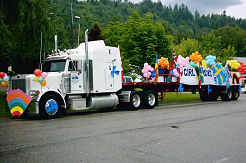 Sunfest Parade – MTI donated a tractor, flat deck and driver to the local Girl Guides as well as the SHSS and J Lloyd Crowe high school bands for their floats in the annual Castlegar Sunfest Parade. 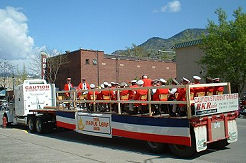 Silver City Days – The Maple Leaf Band has been an active community band in Trail, BC since 1917. Some of the members are elderly and find it difficult to march in the Silver City Days parade, so MTI helped out with a flat deck trailer and tractor to transport the band during the parade.

Other local groups and organizations have also received assistance from MTI over the years; providing free delivery of items like apples, turkeys and Christmas trees for various fundraising events. Such groups include the Castlegar Aquanauts, the Children’s Orchard Russian Exposure Preschool, the United Church of Castlegar, SHSS Grad Classes and the Castlegar Evening Rotary Club.

Along with AM Ford of Trail, we’ve also donated two new AED units – Automatic Electric Defibulators – which are now being utilized by Castlegar & District Recreation & Aquatic Centre and the Pioneer Arena.

MTI / Kootenay Charters has also provided bus transportation for the annual Pass Creek Fall Fair and a variety of golf tournaments amongst others.

Want to learn about chaining up? » Take our 4 hour course!